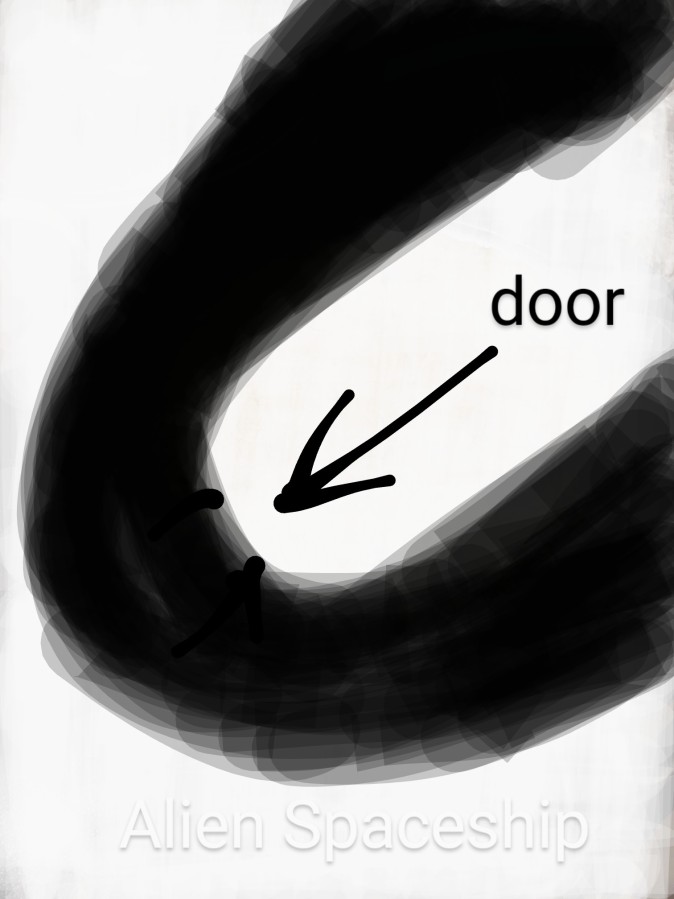 A while back, a strange event took place. A man decided to drill a hole down Ten Feet to put a piece of Oil Well Casing down in the hole. And he was going to put a large pole inside that casing pipe and cement it all in. And a TV Antenna was to be put on top of the tall Pole.

But a strange thing HAPPENED. As the drill drilled down into the Dirt, it struck a solid object at eight feet down. The drill simply could not cut into the object. So. The Drill left and a ground radar used to find bodies buried down in the earth. Was brought in and it mapped out a strange object or shape.

The landowner then rented a Backhoe and he went on about uncovering the Dirt covering over it. And next, he brought in a Track-hole to dig even deeper. And an amazing strange weird object was uncovered. And it was still pretty dirty.

So. The man called in a man with a steam sprayer to clean the object. And in a day, he had the object steam cleaned. And when he did, he found two seams that were barely exposed.

Cleaned, the object had a very dark look similar to Duty. Dark Dirt. More blackest like good farm land. And the two seams.

The man looked over the entire object and shook his head wondering what this object was.

And he went in to his home where the front part was under his home. Under His House! And as he sat in his house, he thought he had heard something outside and he walked out to look for the cause of the noise.

And as he walked around the large 30′ × 20′ × 20′ tall. He thought of the many ideas the individuals who saw it had given him. But the coast one was an object from Space. And the other strange thing-you couldn’t cut it or even search it. Nothing he had in his garage would cut it. And when his Cutting Torch couldn’t cut or melt it, he did wonder what sort of metal this was.

He then walked up to the seams. And He noticed three tiny notches and grabbed at them. Then the most amazing thing took place. The door slowly opened. And when it did, the man was shocked. 😲!!!

So, he then went inside. Yes, he went inside. And inside, there was the most amazing array of strange Objects.

And lying on his back was whatsoever might to be an Alien sitting in a possible Pilot Seat but a weird container or whatever but a flashlight didn’t really break deep into it visibly. But the strangest of A Body in Covered form of a Protective Shield? And the body part lying close in the seat sort of thing was mummified. Or seemed that possibility. And he realized the Spacecraft went 10′-15′ farther under his house.

And the man looked for an hour and even touched things but nothing did anything. Nothing.

And when he finally walked out, the door went back up making no noise. And it closed completely.

Now came the biggest Question? Who to Tell?

So, he slept on it and called some kin. Then the next Day, he called SPACE X and asked to talk to Elon Musk. And the West Texas Facility laughed at him as they got off the phone each time.

But then, he got an email Address and sent pics of both outside and inside of the ship. And two days later, Elon Musk called the man. And on the third day, Elon was at the man’s house. And soon after a few pleasantries, Elon asked to see the Spaceship that even he considered some form of great, elaborate Hoax.

And the two men walked around the large Object.

And can you Open the Door in the pics you sent me?

And the man did. And after it came down, Elon walked in and looked around. And Elon slowly and softly ran his hand across the entire Inside after he had out on a pair of Safety Gloves.

The Elon asked-How much do you want for it?

That’s a ton of money.

And that is exactly what you think it is and only one of a kind.

Elon stood there for a minute and was in deep thought.

I’ll get back to you. And Elon left.

Two days later, an Environmental Officer and U.S. Marshals served an EVICTION NOTICE and it gave him to evacuate in 30 minutes. And a Motel room to go to.

And they told him nothing more.

And the man went to a Motel with a kitchen in the room and was the room was already PAID for him.

And after a month was over, a U.S. Marshal visited the man at the motel and told him he could return to his home. The U.S. Marshal said nothing more.

So, he went home and gas he drive home, he wondered what was waiting for him?

And there where the Spacecraft had been was a huge Swimming Pool with a beautiful Garden all around. The man liked the swimming pool. But where was his Spaceship he’d found?

And inside the House, there was an envelope that had some information for him in it. And the man sat down in a rocking chair and opened the envelope.

And in it was a Thank You Note-from Elon Musk.

What else was in it? A number to Call and man’s name to Talk to. So, he called the number. And in a few minutes, the landowner was told he now had access to an Account in His Name for One Billion Dollars worth of Bitcoins in it.

Bitcoins? Hell, I don’t know nothing about any Bitcoins.

Yes, you use it just like Cash and you can buy anything.

I don’t really need no cash. Sure don’t need no Bitcoins.

And that’s was a few years ago, and the landowner still hasn’t spent a single Bitcoin. But the real mystery lies with his did they get such a huge Spacecraft out of that big dig hole?

Did they use a Crane Helicopter?

And where was it taken?

How long had the Object been down under eight feet of dirt? Did it crash there? And more so, what Technology will Elon and His Brilliant Team of Scientist find out like How did it travel? By what method? And the metal? What was it? A new ELEMENT found? Unknown to Earth? But possibly from MARS?

The Questions keep coming…please don’t lose any sleep as you read this Story to your Kids. But they might have A lot of questions to ask you after you do. Lol

Did Elon learn something from that Spaceship and it’s the real reason he wants to go to Mars? Or is he scratching his Head too? Was it worth One Billion in Bitcoins? Elon really hasn’t had it long enough most likely to learn all the Alien Ship’s Secrets. The most amazing Mystery ever!

The man said it reminded him most of a kids floaty but curled back in the middle and then squashed down with a flat top and bottom. But he didn’t know what the front looked like…it was under his house.