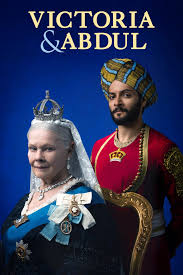 Everyone has an opinion. But this Movie is one that has exceptional Acting in it. The Storyline is Based on True Events. And it’s just an all around wonderfully filling Movie. The Movie shows the loneliness of Being at the Top. And there were more than one Attempt on her life. A Queen and her kind Muslim Teacher whom the Royal Family hated. I completely enjoyed this Movie.

I’m afraid too many saw an Old woman and a Muslim in their Negative Reviews. I saw a Great Movie.

Pop some Popcorn and Enjoy! On NETFLIX.

I NEVER, NEVER spent such an evening!!! MY DEAREST DEAREST DEAR Albert … his excessive love & affection gave me feelings of heavenly love & happiness I never could have hoped to have felt before! He clasped me in his arms, & we kissed each other again & again! His beauty, his sweetness & gentleness – really how can I ever be thankful enough to have such a Husband! … to be called by names of tenderness, I have never yet heard used to me before – was bliss beyond belief! Oh! This was the happiest day of my life!

People writing their Own Diaries leave behind a very unique interpretation of their existence.

Based on a True Story

Abdul Karim, a young prison clerk from British India, is instructed to travel to Britain for Queen Victoria‘s Golden Jubilee in 1887 to present her with a mohur, a gold coin that has been minted as a token of appreciation from British-ruled India. Abdul is from a Muslim, Urdu-speaking family in India.

The queen, lonely and tired of her fawning courtiers, develops an interest in and then a friendship with Abdul. She spends time with him alone and gives him a bejeweled locket with her photograph. She promotes him to be her Munshi and asks him to teach her Urdu and the Quran. When Victoria discovers he is married, she has him bring his wife to England. His wife and his mother-in-law both wear black burqas, much to the consternation of the household—and the fascination of Victoria.

As Victoria’s interest in India grows, she has the Durbar Room built at her Isle of Wight home of Osborne House for state functions. It is elaborately and intricately decorated, with a carpet from Agra, formal portraits of renowned Indians, a replica of the Peacock Throne and carvings by Bhai Ram Singh.

While Victoria treats Abdul as a son, his preferment is resented by her household and inner circle, including her son, Bertie, and the prime minister. The household plots to undermine their relationship, hoping that Abdul will be sent home. When Victoria embarrasses herself by recounting Abdul’s one-sided account of the Indian Rebellion of 1857 to the court, Victoria’s faith and trust in him are shaken. She decides he must return to India, but soon changes her mind and asks him to stay.

The prime minister is adamant that the royal household must be rid of Abdul. They research his family background in India and present Victoria with a dossier showing that his family is more ordinary and poor than Abdul claimed. When Victoria insists that her doctor examine Abdul to learn why his wife has not become pregnant, he discovers that Abdul has gonorrhea. He expects the queen will dismiss Abdul in disgust, but Victoria remains loyal to him and admonishes her courtiers for plotting against him. She announces her intention to give Abdul a knighthood.

Eventually, the household decides that Victoria must break with Abdul. If not, they all will resign and certify Victoria as insane. When Victoria is told, she angrily summons the entire household and demands that anyone who wants to resign step forward. When none do, she says she has decided against making Abdul a knight. She will instead include him in her next honours list as a Commander of the Royal Victorian Order.

When Victoria falls ill, she urges Abdul to return to India while she can still protect him and warns him that the court will turn on him after her death; Abdul insists that he will stay until Victoria’s death. In 1901, Victoria dies, and her son, Bertie, now Edward VII, rejects Abdul, burning all the gifts and papers from the Queen, and sending him and his family back to India. Abdul’s wife saves the locket Victoria gave him.

It is revealed that Abdul lived in India until his death eight years later in 1909. The film ends with Abdul kneeling at a large statue of Queen Victoria close to the Taj Mahal, talking to it and kissing its feet in respect.

Karim was born the son of a hospital assistant at Lalitpur, near Jhansi in British India. In 1887, the year of Victoria’s Golden Jubilee, Karim was one of two Indians selected to become servants to the Queen. Victoria came to like him a great deal and gave him the title of “Munshi” (“clerk” or “teacher”). Victoria appointed him to be her Indian Secretary, showered him with honours, and obtained a land grant for him in India.

The close platonic[2][3] relationship between Karim and the Queen led to friction within the Royal Household, the other members of which felt themselves to be superior to him. The Queen insisted on taking Karim with her on her travels, which caused arguments between her and her other attendants. Following Victoria’s death in 1901, her successor, Edward VII, returned Karim to India and ordered the confiscation and destruction of the Munshi’s correspondence with Victoria. Karim subsequently lived quietly near Agra, on the estate that Victoria had arranged for him, until his death at the age of 46.

Below is a great Read-