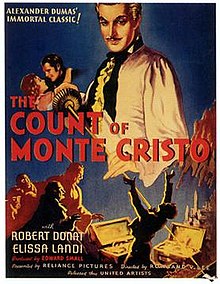 In 1815, a French merchant ship stops at the island of Elba. A letter from the exiled Napoleon is given to the ship’s captain to deliver to a man in Marseille. Before he dies of a sickness, the captain entrusts the task to his first officer, Edmond Dantès (Donat). However, the city magistrate, Raymond de Villefort, Jr. (Calhern), is tipped off by an informer, the second officer, Danglars (Raymond Walburn), and has both men arrested after the exchange.

Dantès’ friend Fernand Mondego (Sidney Blackmer) accompanies him to the jail. However, he, Danglars, and de Villefort all stand to gain from keeping Dantès imprisoned: Mondego is in love with Dantès’ fiancée, Mercedes (Landi); Danglars wants to be promoted captain in Dantès’ place; and the man who accepted the letter turns out to be de Villefort’s father (Lawrence Grant). De Villefort consigns Dantès without trial to a notorious prison, the Château d’If, on the false testimony of Danglars.

When Napoleon returns to France, giving Dantès’ friends hope for his release, de Villefort signs a false statement that he was killed trying to escape, which Mondego shows to Mercedes. Deceived, she gives in to her mother’s deathbed wish and marries Mondego.

Eight years of solitary confinement follow for Dantès. Then one day, the aged Abbé Faria (O. P. Heggie), a fellow prisoner, breaks into his cell through a tunnel he has been digging. The two join forces; Faria calculates it will take five more years to finish. In the meantime, he starts educating Dantès.

However, as they near their goal, a cave-in fatally injures the old man. Before he dies, he bequeaths a vast hidden treasure to his protégé (Faria’s enemies had tortured and imprisoned him in an unsuccessful attempt to extract its location). The body is sewn into a shroud, but while the undertaker is away, Dantès substitutes himself for the corpse undetected. He is cast into the sea. He frees himself and is picked up by a smuggling ship.

Dantès later follows Faria’s directions and finds the treasure on the uninhabited island of Monte Cristo. With a fortune at his command, he sets in motion his plans for revenge. To begin, he arranges to have Albert (Mercedes and Mondego’s son) kidnapped and held for ransom. Dantès “rescues” the younger man in order to gain entry into Paris society, using his purchased title of Count of Monte Cristo.

First to be brought to justice is Mondego. While the French ambassador to Albania, Mondego gained renown for his bravery in an unsuccessful defense of Ali Pasha. Dantès arranges a ball to “honor” his enemy, then arranges to have him exposed publicly as the one who betrayed Ali Pasha to his death at the hands of the Turks. Unaware of the count’s role in his disgrace, Mondego goes to him for advice. Dantès reveals his identity and they engage in a duel; Dantès wins, but spares Mondego, who returns home and commits suicide.

Next is Danglars, now the most influential banker in Paris. Dantès uses his services to buy and sell shares, sharing tips he receives from his informants. When these turn out to be infallibly profitable, Danglars bribes a man to send him copies of messages to Dantès. Greed leads him to invest all of his money on the next report, just as Dantès had planned. When the tip proves to be false, Danglars is bankrupted. Dantès reveals his true identity to Danglars, who is left penniless and insane.

However, there are unexpected complications that threaten Dantès’ carefully conceived plans. Albert Mondego learns of his involvement in his father’s downfall and challenges him to a duel. Mercedes, who had recognized her former lover upon their first meeting, begs him not to kill her son. He agrees. Albert deliberately changes his aim because his mother has told him who Monte Cristo really is, and the duel ends without injury.

De Villefort has risen to the high office of State Attorney. Dantès sends him information about his true identity and activities, which leads to his arrest and trial. At first, Dantès refuses to testify, in order to shield de Villefort’s daughter Valentine (Irene Hervey), who is in love with Albert. However, when she learns of it, she urges him to defend himself. Dantès does so, providing evidence of de Villefort’s longstanding corruption.

At last, with all of his enemies destroyed, Dantès is reunited with Mercedes.

The Count of Monte Cristo is a 1934 American adventure film directed by Rowland V. Lee and starring Robert Donat and Elissa Landi. Based on the 1844 novel The Count of Monte Cristo by Alexandre Dumas, the story concerns a man who is unjustly imprisoned for 20 years for innocently delivering a letter entrusted to him. When he finally escapes, he seeks revenge against the greedy men who conspired to put him in prison.[2][3]

This is the first sound film adaptation of Dumas’ novel—five silent films preceded it.