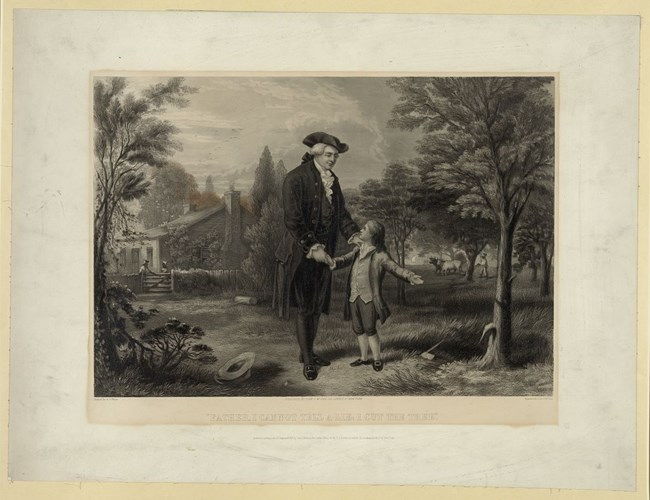 Most Americans are NOT familiar of the Cherry Tree Story. It’s been Dropped a good while back. But who brought that Story into prominence? Who promoted it? Abraham Lincoln did. But you’re telling our Ages if you were taught the George Washington and the Cherry Tree Story, in Elementary School. But yes, it’s been Dropped like a Rock. And what’s up with dropping a Story highlighting Telling the Truth? Why was that done? Too White? Too what to certain people?

Telling the Truth has always been a cornerstone in American Democracy. Hasn’t this been in your understandings? Yes, telling the Truth might seem no big deal. But try living a Life based on never telling the Truth. And what would that give all of us if those persons in our Life Zones all Lied? What would happen if all of us lied to each other on a grand scale?

What if all Parents woke up in 2021 and every single child began Lying? And every single Teacher began Lying in the Classroom? And the Preacher suddenly debunked Heaven and Hell and told everyone that the Church was being changed into a Recreation Room with Card Games every Saturday Night? Would that bother you? Would telling the truth mean anything anymore? To some it would, but what about all those who are liking Lying, enjoying Lying to others, and those that Lie to us all the time? What if you agreed to pay $700 for new Tires on your car and they said come back in an hour and your car will be ready. You do and your Car is ready and then the Employee hands you a Bill for $1276.33. Now, does this sort of fibbing bother us? Almost a $600 difference from what you were told. But are you gonna say-put my old tires back on my car.

No. You’re going to take that Hit and drive out completely upset. Might even be pissed-off. But forget about it. Lying doesn’t have any unrepairable consequences, or do they? What if all the Preachers started Lying starting this coming Sunday? And you can think of other ways lying might not be accepted by you in your Life Zone. Can you?

But exactly what did you take away from the George Washington Cherry Tree Tale? Fact or Fiction?

Well, here, get reacquainted with the Tale all over again-

George Washington and the Cherry Tree

Few figures in American history are surrounded by myth as George Washington: he had wooden teeth, he was so strong he could throw a silver dollar across the Potomac, or that he wore a wig. What is perhaps the most enduring tale is he chopped down a cherry tree when he was a boy and told his dad the truth about it, in turn gaining the moral high ground that we should all aim for. This story is not so easily disproved.

The story goes that when Washington was six years old, he received a hatchet as a gift, after which he promptly went and cut down his father’s favorite cherry tree. When his father found out about it, he was understandably angry and confronted his son, asking if he had done it, to which little George replied that yes, indeed, he had done it. And with those brave words, father’s anger melted away and he embraced his son, exclaiming that his honesty was worth more than a thousand trees.

That sounds like a nice, uplifting story, but did it happen? Nobody knows for sure.
When Washington died in 1799, there was a great demand around the country to learn more about our first national hero. Minister and itinerant bookseller Mason Locke Weems, more popularly known as Parson Weems, was more than willing to fulfill that need and in 1800 quickly wrote and published The Life of Washington, an immediate bestseller that cemented Washington’s legendary status. It wasn’t until the book’s fifth edition in 1806 that the cherry tree story first made an appearance.

Though profit may have been high on Weems’ priority list in writing this biography, as a minister he wanted to teach morality, and the best way to do that was to show by example using the one individual everyone looked up to. Washington’s admission of guilt was proof that his public greatness was due to his private virtues, to which anyone could aspire. Bringing in the father also served to add more depth to who George Washington was as a person. Though much was known and written about Washington’s military feats, very little was known about his relationship with his father, who had died when George was 11. The cherry tree example of a warm and generous relationship between father and son added strong emphasis to the character of the quickly-being-mythologized George Washington.

So is it true? Weems said he got the story from an elderly woman who had been friends with the family. Since she chose to remain anonymous it is an unreliable source. The official answer from both Ferry Farm, Washington’s childhood home where it would have occurred, and Mount Vernon, is no, it’s only a story. But, really, does it matter?

In 1861, on his way to his inauguration in Washington, D.C., newly-elected president Abraham Lincoln stopped to speak at the New Jersey Senate. He told them he had read a number of books growing up that taught him basic life lessons, Pilgrim’s Progress, Aesop’s Fables, and Lessons in Elocution, to name just a few. But it was The Life of George Washington, he continued, that really sparked his imagination and showed “there must have been something more than common” in Washington and what he had stood for.

For Weems’ book and story to have a good message (i.e. don’t lie) and for it to have made such an impression on someone as equally influential as Lincoln, who are we to protest?

We all know that Abraham Lincoln was a voracious reader. He had essentially no formal education and acquired his peerless sense of the English language from his reading, including Shakespeare’s plays and the King James Bible. But it appears that he read almost no history in his younger days. The sole exception that we know of was Mason Weems’s 1799 biography of George Washington…it’s the book from which the fable of young George chopping down the cherry tree came.

The mature Lincoln went on to develop a more informed and sophisticated understanding of history. And yet elements of Weems’s History stayed with him all his life, influencing his view of the American Revolution and the Civil War, and reflecting his fundamental values.

We know this because in February of 1861, forty years after he first read Weems’s book, Lincoln drew upon it.

Lincoln stopped off in Trenton on his way to Washington, and in a short but powerful speech to the New Jersey State Senate, recalled the effect of Weems’s book on him as a young man.

But do you hold Telling the Truth to a Gold Standard? Or do you care?

“there must have been something more than common”