In 2062, you will gaze up into the night Sky and watch a regular visitor return to tease many a thought out of the viewing minds. Out of your mind if you’re so lucky to see it. And this little Visitor is calling out for a surface sample to be retrieved and brought back to Earth.

And if man is smart enough to do this, because make no doubt, this would be an amazing feat, then man will learn why God has sent this little Messenger for man to come Visit. And touching the heart is calling out, but Scientist will make excuses for not attempting this because they don’t like being shown-up.

In the 2nd Stimulus Package, Trump could Order NASA to complete such a highly technical Mission and he, like me, won’t be here to see it thru. But you might. A manned Mission would be incredible, is Elon Musk up to the task? And even after Trump’s passing, He could be known for giving mankind it’s Greatest Discovery!

But I know something extremely important is inside Haley’s Comet. But can Man go fetch it?

Don’t you have the least bit of curiosity to wonder what it might be? What is there to be discovered that man doesn’t know yet? And trust me, man has so much to learn yet that it’s not even funny.

Be greater than yourself and Reach for the Stars and the Unknown and that which is difficult to do.

The rest is from NASA!

In 1986, the European spacecraft Giotto became one of the first spacecraft ever to encounter and photograph the nucleus of a comet, passing and imaging Halley’s nucleus as it receded from the Sun. Image Credit: Halley Multicolor Camera Team, Giotto Project, ESA

1P/Halley is often called the most famous comet because it marked the first time astronomers understood comets could be repeat visitors to our night skies. Astronomers have now linked the comet’s appearances to observations dating back more than 2,000 years.

Halley was last seen in Earth’s skies in 1986 and was met in space by an international fleet of spacecraft. It will return in 2061 on its regular 76-year journey around the Sun.

The History of Halley’s Comet

Until the time of English astronomer Edmond Halley (1656-1742), comets were believed to make only one pass through the solar system.

But in 1705, Halley used Isaac Newton’s theories of gravitation and planetary motions to compute the orbits of several comets. Halley found the similarities in the orbits of bright comets reported in 1531, 1607 and 1682 and he suggested that the trio were actually a single comet making return trips. Halley correctly predicted the comet’s return in 1758-1759 — 16 years after his death — and history’s first known “periodic” comet was later named in his honor.

The comet has since been connected to ancient observations going back more than 2,000 years. It is featured in the famous Bayeux tapestry, which chronicles the Battle of Hastings in 1066.

In 1986, an international fleet spacecraft met the comet for an unprecedented study from a variety of vantage points. The science fleet included Japan’s Suisei and Sakigake spacecraft, the Soviet Union’s Vega 1 and Vega 2 (repurposed after a successful Venus mission), the international ISEE-3 (ICE) spacecraft and the European Space Agency’s Giotto. NASA’s Pioneer 7 and Pioneer 12 also contributed the the bounty of science data collected. 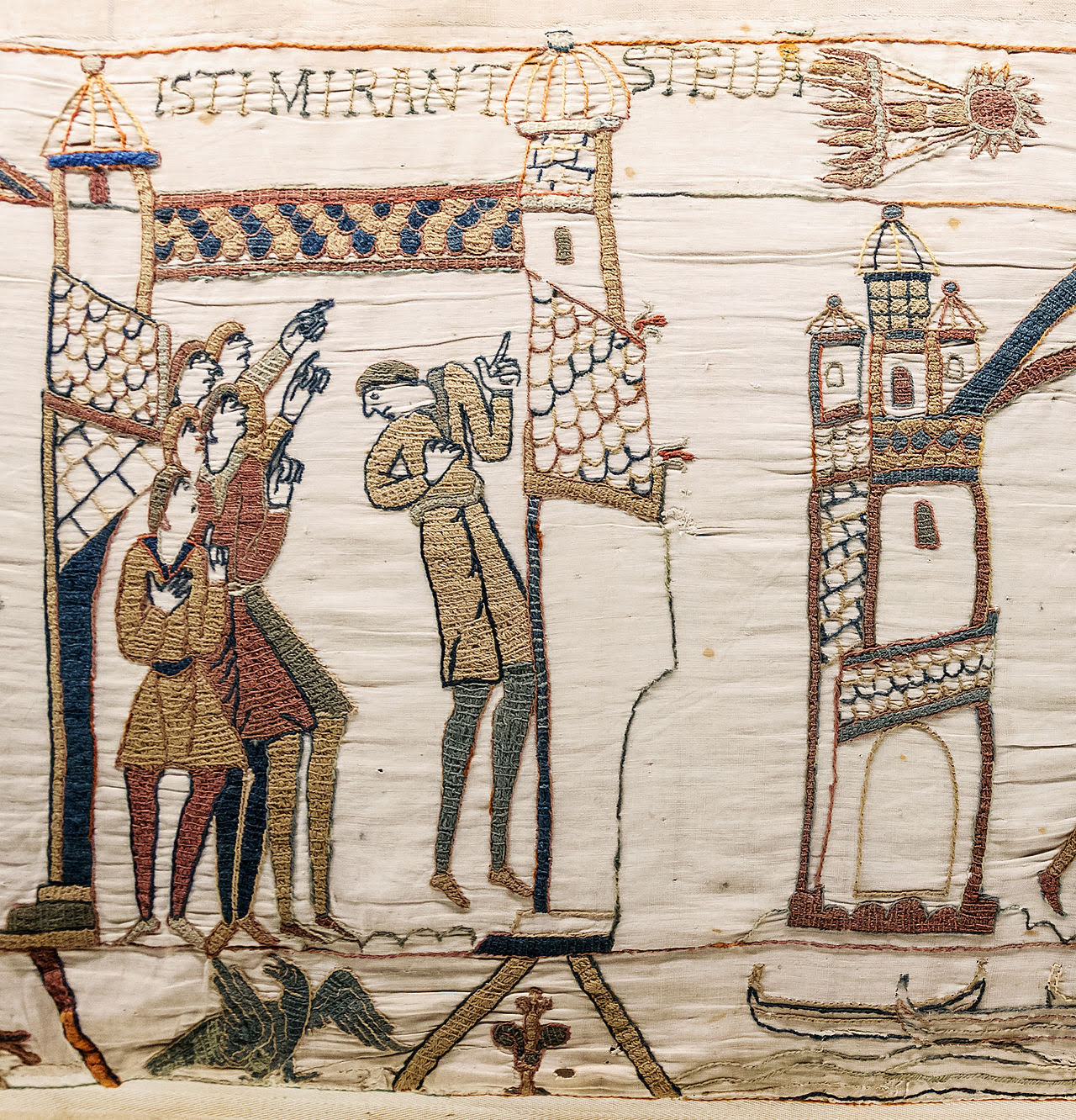 A panel from the Bayeux tapestry showing people looking at what would later be known as Halley’s comet. Credit: By Myrabella – Own work, Public Domain

Each time Halley returns to the inner solar system its nucleus sprays ice and rock into space. This debris stream results in two weak meteor showers each year: the Eta Aquarids in May and the Orionids in October.

Halley’s dimensions are about 9.3 by 5 miles (15 kilometers by 8 kilometers). It is one of the darkest, or least reflective, objects in the solar system. It has an albedo of 0.03, which means that it reflects only 3% of the light that falls on it.

Comet Halley moves backward (opposite to Earth’s motion) around the Sun in a plane tilted 18 degrees to that of the Earth’s orbit. Halley’s backward, or retrograde, motion is unusual among short-period comets, as is its greatest distance from the Sun (aphelion) is beyond the orbit of Neptune.

Halley’s orbit period is, on average, 76 Earth years. This corresponds to an orbital circumference around the Sun of about 7.6 billion miles (12.2 billion kilometers). The period varies from appearance to appearance because of the gravitational effects of the planets. Measured from one perihelion passage to the next, Halley’s period has been as short as 74.42 years (1835-1910) and as long as 79.25 years (451-530).

The comet’s closest approach to Earth occurred in 837, at a distance of 0.033 AU (3.07 million miles or 4.94 million kilometers). At that time, April 10, 837, Halley reached a total apparent brightness of about magnitude -3.5, nearly that of Venus at greatest brilliance. The light of Halley was spread over an extended area, however, so its surface brightness was less than that of Venus.

During its 1986 appearance, Halley’s nearest approach to Earth occured on the outbound leg of the trip at a distance of 0.42 AU (39 million miles or 63 million kilometers). It was slightly brighter than the north star Polaris, but again spread over a much larger area than a point-like star.

With each orbit around the Sun, a comet the size of Halley loses an estimated 3 to 10 feet (1 to 3 meters) of material from the surface of its nucleus. Thus, as a comet ages, it eventually dims in appearance and may lose all the ices in its nucleus. The tails disappear at that stage, and the comet finally evolves into a dark mass of rocky material or perhaps dissipates into dust.

Scientists calculate that an average periodic comet lives to complete about 1,000 trips around the Sun. Halley has been in its present orbit for at least 16,000 years, but it has shown no obvious signs of aging in its recorded appearances.

How Comet 1P/Halley Got Its Name

Comets are usually named for their discoverer(s) or for the name of the observatory/telescope used in the discovery. Since Halley correctly predicted the return of this comet ​— the first such prediction — it is named for him to honor him. The letter “P” indicates that Halley is a “periodic” comet. Periodic comets have an orbital period of less than 200 years.